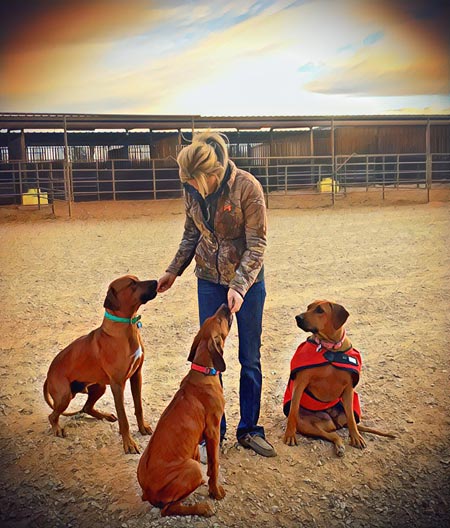 The Rhodesian Ridgeback is an all-purpose “Renaissance hound” whose hallmark is the ridge, or stripe of backward-growing hair, on his back. They are remarkable animals! SMART, SENSITIVE, INCREDIBLY LOYAL, ELEGANTLY BEAUTIFUL. THE RIDGEBACK WAS BRED FOR A SPECIFIC PURPOSE IN THE WILDS OF AFRICA. TODAY, ALTHOUGH WE AREN'T HUNTING LIONS, WE CAN ALL BENEFIT FROM THE CHARACTER, NATURE AND PHYSICAL ATTRIBUTES THAT THE EARLY PIONEERS AND HUNTERS RELIED ON. THE MODERN RIDGEBACK CAN STILL HUNT, HERD, AND PROTECT, YET BE AN INTEGRAL PART OF THE FAMILY, ROMPING THROUGH THE YARD CHASING REAL AND IMAGINARY PREY, OR CUDDLING GENTLY WITH THE CHILDREN. THESE ARE THE QUALITIES THAT HAVE ENDEARED THE RIDGEBACK TO OUR FAMILY. OUR MISSION IS TO PAY TRIBUTE TO THE HUNTERS, PIONEERS, KENNEL OWNERS AND BREED ADVOCATES THAT MADE THE RIDGEBACK THE WONDERFUL COMPANION IT IS TODAY, AND TO STAY TRUE TO THEIR AFRICAN HERITAGE.

Beneath the Ridgeback’s trademark ridge is a whole lot of hound: Ridgebacks are fast and powerful athletes who can weigh between 80 and 90 pounds, and oftentimes more. They come in only one color – wheaten – which spans every shade seen in a wheat field, from pale flaxen to the burnished red of a maturing crop. Ridgebacks also have two nose colors: black and the less commonly seen brown.

The formidable Ridgeback can be strong willed, independent, and sometimes domineering. Ridgebacks must be guided with a firm but fair hand from puppyhood. They are faithful friends, protective of their loved ones and meltingly affectionate with those whom they trust. Still, a Ridgeback can be too much hound for the novice dog owner.

The Ridgeback represents a strong, muscular and active hound, symmetrical and balanced in outline. A mature Ridgeback is a handsome, upstanding and athletic dog, capable of great endurance with a fair (good) amount of speed. Of even, dignified temperament, the Ridgeback is devoted and affectionate to his master, reserved with strangers. The peculiarity of this breed is the ridge on the back. The ridge must be regarded as the characteristic feature of the breed.

The Rhodesian Ridgeback is a unique creation of southern Africa, resulting from crosses between the native ridged Khoikhoi dog and European breeds brought by Dutch colonists, the Boers, including Greyhounds and various Terriers. The infusion of native Khoi blood gave resulting generations a resiliency against local pests such as the tsetse fly, as well as an inborn knowledge of how to navigate their new African environs – and outwit its deadly predators.

In the late 19th Century, big-game hunter Cornelius van Rooyen from Rhodesia incorporated two ridged Greyhound-like females into his pack of lion dogs. He found that their ridged offspring excelled at confronting and confounding the king of beasts, giving the hunter time to sight in his rifle and dispatch his prey. These ridged dogs were also successful at fending off other dangerous animals such as leopards and baboons, trotting effortlessly alongside horse-mounted riders all day, breaking off to course quick-footed game such as antelope to provide meat for the pot, and protecting the homestead from all intruders. They were known then, as they are today, for their devotion to family, and tolerance and affection for its children.

In 1922, a meeting was convened to write the first Rhodesian Ridgeback standard. By then, big-game hunting had already begun to fade in South Africa, and the breed itself was on the brink of extinction. The dogs convened at this meeting ranged in size and appearance from Bull Terriers to Great Danes, and the Dalmatian standard was used as a template to arrive at the standardized vision of the breed that we know today.

"One smile can start a friendship. One word can end a fight. One look can save a relationship. One Rhodesian Ridgeback can change your life."