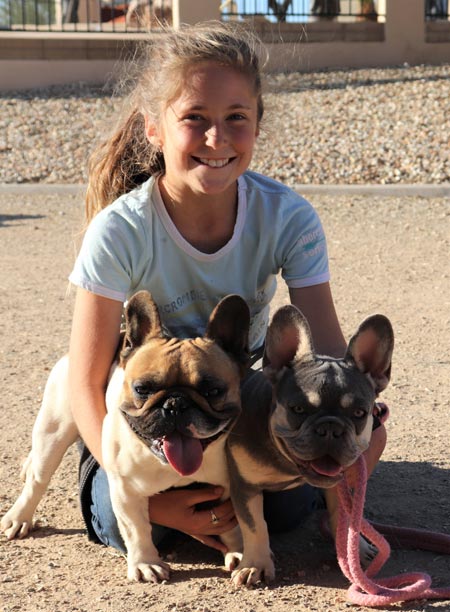 The adorable and very popular French Bulldog resembles a Bulldog in miniature, except for the large, erect “bat ears” that are the breed’s trademark feature. The head is large and square, with heavy wrinkles rolled above the extremely short nose. The body beneath the smooth, brilliant coat is compact and muscular.

The bright, affectionate Frenchie is a charmer. Dogs of few words, Frenchies don’t bark much—but their alertness makes them excellent watchdogs. They happily adapt to life with singles, couples, or families, and do not require a lot of outdoor exercise. They get on well with other animals and enjoy making new friends of the human variety. It is no wonder that city folk from Paris to Peoria swear by this vastly amusing and companionable breed.

A high-quality dog food appropriate to the dog’s age (puppy, adult, or senior) will have all the nutrients the breed needs. Frenchies are prone to obesity, which can damage their physical structure and puts them at higher risk for some of the breed’s health issues, so it is vital to watch their calorie intake and weight. If you choose to give your dog treats, do so in moderation. Give table scraps sparingly, if at all, especially avoiding cooked bones and foods high in fat. Learn about which human foods are safe for dogs and which are not. Check with your vet if you have any concerns about your dog’s weight or diet. All our Frenchies are fed Fromm natural dog food, wet and dry. You will receive a sample to get you started in your puppy bag as well.

In the mid-1800s, a toy-size Bulldog found favor in some English cities, including Nottingham, then a center for lace making. The toy Bulldog became something of a mascot for Nottingham’s lace makers. This was the height of the Industrial Revolution in England, and such “cottage industries” as lace making were increasingly threatened. Many in the lace trade relocated to northern France, and of course, they brought their toy Bulldogs with them.

The little dogs became popular in the French countryside where lace makers settled. Over a span of decades, the toy Bulldogs were crossed with other breeds, perhaps terriers and Pugs, and, along the way, developed their now-famous bat ears. They were given the name Bouledogue Français.

Paris eventually discovered the delightful new breed, and thus began the Frenchie’s reputation as city dog par excellence. The breed came to be associated with Paris café life, and with the bon vivants and fancy ladies who sought nocturnal pleasures in Parisian dancehalls. Edgar Degas and Toulouse-Lautrec depicted the Frenchie in paintings of the Paris demimonde.
By the end of the 19th century, the Frenchie’s popularity had spread across Europe and to America. The breed was tougher sell in England. The Bulldog was a national symbol, and it rankled many Englishmen that their age-old rivals, the French, would dare adapt it to their purposes.

American devotees of the early 1900s contributed to the breed by insisting that the bat ear, as opposed to the “rose ear,” was the correct Frenchie type. It is by this distinctive feature that the Frenchie is instantly recognizable the world over.

"Everyone thinks they have the best dog, and none of them are wrong."